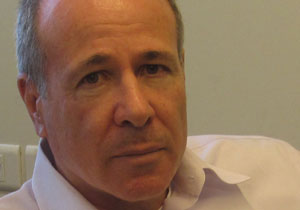 Yehoo Even-Zahav is a military veteran with 35-years of experience in ‎communications technology. Even-Zahav’s strong organizational, managerial and ‎command skills saw him working with thousands of computer scientists, ‎programmers, engineers and support personnel, to implement hundreds of highly ‎complex, multidisciplinary projects. ‎‏ ‏
He was acting as CEO at CTI Israel until June 2017 after being S.V.P of International and Foreign ‎Military Sales at the US-based CTI Computech International from 2008.

Prior to his position as Amdocs’ Delivery Unit General Manager for two years, Even-‎Zahav gained rich operational experience as a signal officer in the field, from ‎battalion level through territorial command until accepting the position as commander ‎of the C4I (Command, Control, Communications, Computers and Information) ‎Technology Division, of the Israeli Defense force C4I Branch until 2005. ‎

In his operational posts, Yehoo was responsible for design, fielding and operation of ‎C4I systems for the operational units.‎

Additional career highlights include the establishment and management of a ‎technological unit to develop and operate the major C4I systems of the IDF, and ‎overseeing more than $600M in technical projects at a given time.‎

A graduate of the IDF’s National Defense College, Even-Zahav also holds an M.A. in ‎Political Science (with a focus on defense studies) from Haifa University, and a B.Sc. ‎in Electrical and Computer Engineering, Ben Gurion University.

Ofer Azari is a Signal Corps veteran with 35 years of experience in C4I programs and technologies. His last position was the Technical Officer of DAP (Digitized Army Program) in 2005-2008 at the rank of Colonel.

Ofer served in several senior positions in the C4I and  Radars fields, as a Project Officer and leading R&D groups, in the IDF’s Signal Corps and Ground Forces Command. Among his positions, Ofer served as the Israeli Liaison Officer to U.S. Army CECOM (Communication and Engineering Command) between 2001-2003, positioned at Fort Monmouth, NJ

Ehud (Udi) Kauf is an IDF Signal Corps military veteran with over
37-years of experience in ‎communications-electronics technology. Udi left the IDF Active Service in December 2008 at the rank of Lt. Col.

Since June 2017 he is acting as CEO at CTI Israel
(Computech International), after being V.P Engineering & Sales since 2009.

In 1991, Udi received his Bachelor of Science in Electrical and Computer Engineering from Beer-Sheva’s Ben-Gurion University in Israel. Later, in 2001, he received his Executive MBA Degree from Tel-Aviv University.

Udi has large scale program management and R&D experience in the areas of communication and IT infrastructure, Command and Control applications and systems, Electronic Warfare, software development & hardware development.

Moreover, Udi served as a Liaison Officer for the US Army from 2005-2008. Udi also has a broad knowledge of the US military – the C4ISR main programs and roadmap, organization structure & processes.

Udi is currently a director at the Association for the Commemoration of the Fallen Soldiers of the IDF Signal Corps and a member of the advisory board of the Faculty of Engineering at the Shenkar College of Engineering and Design.

Among his positions, head of C4I systems department at the Ground Forces Technological unit, head of projects branch at the Signal Corps H.Q and head of C2 & Intelligence Systems at the MOD R&D Directorate – MAFAT.